Before Playing a Sonata, Play a Bit of Tag ; Musicians Loosen Up Both Muscles and Minds

Too often, the field of classical music, with its stiff attire, formal concert settings and tradition-bound programs, seems uptight through and through. And that uptightness is most alarming, and potentially harmful, when it seeps, as it often does, into the actual performance.

Many students of classical music, particularly instrumentalists, play as if driven by two overriding goals: to nail a piece technically and to hit all the interpretive shadings their teachers have laid out for them. In comparison with jazz and rock musicians and certainly with actors and dancers, classical instrumentalists often seem sadly, and dangerously, constrained by the weight of tradition and by the physical demands of executing technically daunting scores exactly as written. The prevalence of physical injuries that incapacitate classical performers is evidence of this.

William Westney, a pianist on the faculty of Texas Tech University, is a radical teacher who has been trying to help students loosen up and recapture an instinctive connection to music, something obvious to anyone who has ever watched a toddler bobbing and babbling to a tune on the radio.

That responsiveness is the goal of Mr. Westney's ''Un-Master Class,'' a workshop he has been presenting since 1989 in conservatories and colleges from the Juilliard School in New York to the Seoul High School of Fine Arts in Korea.

''It's so easy to lose touch with what is natural in us musically,'' Mr. Westney said during a recent visit to New York to present his program at Queens College. ''Why does an excellent performance sometimes leave us cold? We blame ourselves if we don't respond. But something is missing in that performance. There is a difference between what we as musicians intend to communicate and what we are actually communicating. Maybe this is one reason that classical music is thought to be in trouble.''

He is never surprised when a new group of students arrive for an un-master class with no idea of what is about to take place. Recently, when some Queens College music majors reported to the wood-paneled LeFrak Concert Hall for a performance workshop, it was clear they had not anticipated the physical workout that was in store for them. For one thing, Mr. Westney's unorthodox methods include getting all the participants off their piano benches and chamber music chairs and onto their feet. He also asks instrumentalists to try singing and moving to their pieces.

Many students had dragged themselves in listlessly after a busy morning, with cellos or violins hitched to their backs. A few women wore snug skirts and high-heeled boots. As they warily took seats onstage, their self-described un-master, an alumnus of Queens College, introduced himself and presented his credentials.

A first-prize winner in the Geneva International Piano Competition, Mr. Westney has been a soloist with L'Orchestre de la Suisse Romande and other major orchestras, has toured internationally and holds a doctorate in performance from Yale University. It is crucial, he believes, that participants know of his background, lest they dismiss him as some kind of flake. (Indeed, the day after his workshop he gave a recital at the school: a demanding program including works by Faure, Liszt and Prokofiev.)

''This is not a traditional master class in which I am the repository of answers,'' he told the students. ''If there are artistic discoveries to be made, I'd like them to come from you.''

A Link of Intuition And the Physical

Mr. Westney spoke at length about musical intuition and its connection to the physical. For the next 40 minutes, he asked everyone to join in the warm-ups to activate a sense of ''music in our bodies, not just in our minds.'' The performance class would follow.

The exercises, similar to acting exercises, have been adapted by Mr. Westney for musicians. After 16 willing students formed a circle onstage, he asked them to make up chants or rhythmic patterns and mirror one another, rather like jazz players trading phrases. Then, as he played a tape of musical selections -- African drumming, the frothy overture to Nicolai's ''Merry Wives of Windsor,'' some electronic music -- he had the students pass a small ball around, as in a game of musical tag: the student with the ball would move into the circle, make up a balletic response to the music that everyone else would imitate, then pass the ball on.

Some students got into it right away; most were inhibited at first. ''I'm asking people to do something that may feel like therapy,'' Mr. Westney said later. ''It's disclosing of yourself to move in front of others. It takes time for people to trust each other.''

Sure enough, as the warm-ups continued, nervous laughter turned gleeful. It was fascinating to see what sensual gestures Arnoldo Venegas, a limber violinist from Venezuela, came up with in response to a somber Gregorian chant: clearly, he was reacting to the curvaceous melodic flow. The exercises do not require that students be in good physical condition. Though a wiry man of 50, Mr. Westney has had no training in dance. Yet from years of doing this work, he moves with uninhibited energy.

Eventually, the performance class began, but in a manner far removed from tradition. Yi Liang, a pianist from Beijing, started off with the gentle first movement of Schubert's Op. 120 Sonata. After her performance, Mr. Westney asked for comments: not suggestions and corrections, but reactions and feelings. That such reactions can be blunter than a traditional master's critique was evident from Mr. Westney's comments.

''You didn't make me ready to listen before you played,'' he said. ''I couldn't tell when you were going to start. Your playing was very lovely, but it was easy for my mind to wander.''

A Reflection Of Early Training

He asked Ms. Liang to stand up and try to feel, sing and, in a sense, enact the music physically. She did so with a comfort that seemed to surprise her. What emerged was a vivid, shapely nonpiano performance. He then asked several students to mimic Ms. Liang's gestures. After this, she tried the piece again at the keyboard. This time, many of the qualities of her performance came through.

What Mr. Westney is doing is an outgrowth, in part, of methods developed by the Swiss composer Emile Jaques-Dalcroze for teaching music to children, training that Mr. Westney was exposed to starting at age 2. Dalcroze, as it is called, is now in the curriculum of several conservatories, including the Longy School of Music in Cambridge, Mass., where Mr. Westney presented his un-master class two years ago. The pianist Victor Rosenbaum, the director of Longy, believes in the value of Dalcroze.

''Performers are too often caught up with what happens from the knuckles down,'' Mr. Rosenbaum said recently. ''Getting away from the instrument and experiencing music in the body is essential.''

What is innovative in Mr. Westney's work, Mr. Rosenbaum said, is the use of movement as a tool in coaching specific performances. Yet he has some reservations: ''The danger is that when you tie the study of music to what you feel, you can become self-indulgent and think that any idea you have is as good as any other.''

Mr. Westney does not disagree: ''The better that students know their pieces, the better they will respond to our work. But there is a wisdom in the body that can tell us whether an interpretation is successful. And no matter how excellent an idea is, if it is not authentic to you, then it is not going to come across.''

Moreover, he said, given the amount of theory and criticism students are exposed to, music schools are much better at passing down the heritage than at activating instincts: ''When they study with a powerful teacher, students feel their instincts get corrected on high authority. So they seal them up.''

The vitality of a master does not easily transfer to a student, he added. ''Even if the teacher cavorts around the studio, trying to get the student to respond, it can have the opposite effect. The student sits at the piano thinking: 'Why aren't I feeling that way? Why can't I participate in this?' ''

That everyone in Mr. Westney's workshop, including himself, cavorted around the stage made a crucial difference.

''I felt funny in the beginning,'' Ms. Liang said. ''But by the end I didn't feel nervous at all. When he asked me to move my body and sing, it helped me to understand the music better. No one ever pointed this out to us this way before.''

Konstantza Chernov, a pianist from Bulgaria, was glad she had chosen to play a melancholic Rachmaninoff elegy for the class. It is hard to project the movement in this inexorably slow music, and Mr. Westney's methods helped her.

''We are used to thinking too much,'' she said. ''The physical exercises made me feel warm and free, and provoked a strong picture of the music inside me.''

Jonathan Weber, a violist from New York, reported that doing these contortions with the body, as he called them, ''forces you to accept what you feel, to own the music you play.''

Not Everyone Shows Enthusiasm

Not everyone felt this way. One cellist, who performed a Brahms sonata with his back to his pianist, was resistant to any kind of movement away from his instrument. Mr. Westney never forces it.

''In this work, we are going from a consciousness that has restraints, to an interchange that is primal,'' he said. ''Some people are not ready; but, to me, that's what performing music entails.''

No doubt, Mr. Westney's early training in Dalcroze prefigured his affinity for movement in music. His piano teacher at Yale, Donald Currier, now a professor emeritus, recalled that when Mr. Westney showed up to audition for the music school, his technique was already formidable, but very relaxed.

''I've always thought that if one could relate movement at the keyboard to physical movement, like walking and swimming, it would make for a less strained, more natural approach,'' Mr. Currier said. ''Bill had that already. He played enormously demanding works, like Ravel's 'Gaspard de la Nuit' and Prokofiev's Second Piano Concerto, with greater sweep and far more ease than most people go through.''

When Mr. Westney started his un-master class, he said, ''I was searching for a more immediate way to get at what I knew was either present, or lacking, in my students, and I was fed up with trying to talk about it.''

Now, when breakthroughs occur in a class, he is re-energized in a way that surpasses any performing experience of his own. ''But,'' he added, ''don't ask me to explain it in words.'' 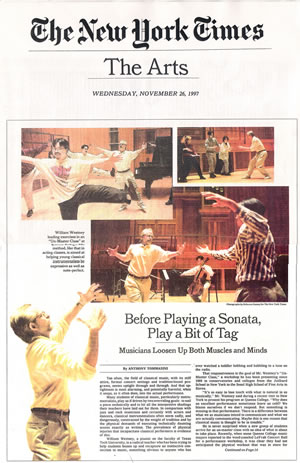